On 16 November 2016, the ICE LAW Project’s Indigenous and Local Perspectives subproject held its first event, a Talking Circle in the Aleutian Islands community of Sand Point, Alaska. The Talking Circle focused on community infrastructure and Arctic search and rescue. The Talking Circle was organised by subproject co-leader Jessica Shadian and held in the Sand Point Community Center, with the help of Jim Gamble, Director of Aleut International Association. Additional funding from the U.S. National Science Foundation facilitated attendance by representatives from Labrador (Canada) and the Commander Islands (Russian Federation). This report was written by Jessica following conclusion of the Talking Circle. A Russian translation of the report can also be found here. 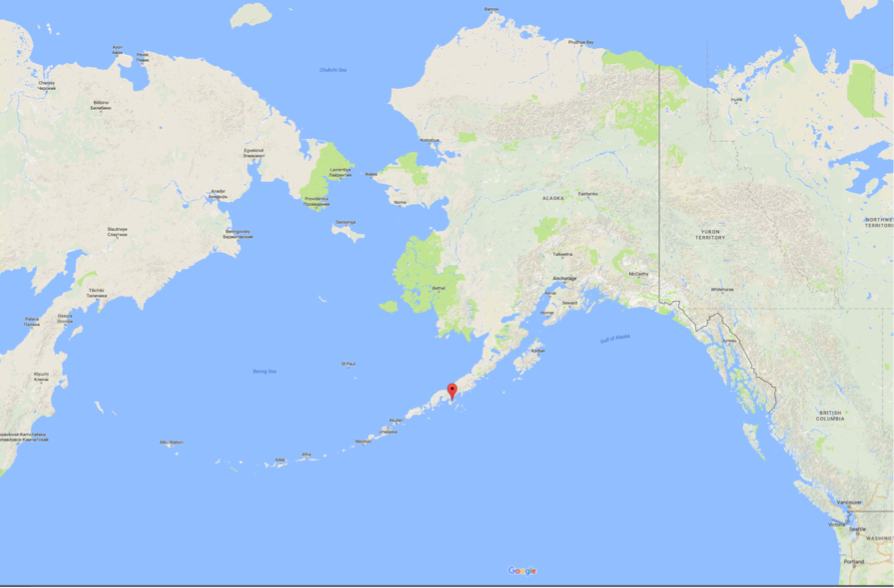 This Talking Circle set out to learn from the community of Sand Point, whether or not climate change is bringing increased coastal traffic through their community and whether or not the community would have the capacity to deal with a coastal incident if one should occur. Further, the Talking Circle sought to explore what kind of cooperation Sand Point has with other levels of governance (including the U.S. Coast Guard) and what kind of cooperation the community would like to have with other governance entities from the Coast Guard to the Arctic Council.

The community of Sand Point, Alaska was chosen because it is located in close proximity to the North Pacific Great Circle Route – which brings thousands of cargo vessels a year within 75 to 200 miles of the community. The loss of sea ice farther north is driving more North to South traffic through the Bering Strait and that adds to the exposure of risk for communities, including Sand Point.

The coastal community of Sand Point itself, however, has not historically had seasonal or year round sea ice. Instead, the loss of sea ice in other parts of the Arctic is having a severe impact on changing weather patterns in that community. Workshop participants stressed that rather than ship traffic being the community’s biggest risk, climate change is creating a large increase in the number of extreme weather conditions and, along with ship accidents, the community of Sand Point must be prepared for a weather emergency.

The Talking Circle included 15-20 participants from the local community, practically all of whom were directly or indirectly involved with maritime issues. Because the community is so small and on the coast, the majority of residents are engaged with shipping or coastal issues in one way or another. Talking Circle participants included the Police Chief, all of the dock workers, several fishermen, city employees, hospital workers (including emergency medical technicians, nurses and administrators) and representatives from the community high school, which is the evacuation centre in the case of an emergency.
Also in attendance were two guests from outside Alaska, whose attendance was made possible by a supplemental grant from the U.S. National Science Foundation. One of these guests was Joey Angnatok, an Inuk fisher from Nain, Labrador (Canada) and leader of Labrador’s SAR (search-and-rescue) team. The coasts off of Nain are ice covered for approximately half the year, which gave Joey a perspective that complemented that of Sand Point residents. The other guest was Ivan Vozhikov, an Aleut from Niolskoye in the Commander Islands (Russian Federation). Ivan is a seal hunter, and, as he proudly noted, he is one of the few people in Russia who can claim that as a primary occupation. Nikolskoye, located on Bering Island at the western end of the Aleutian archipelago, is, like Sand Point, free from ice cover. However, also like Sand Point, it experiences severe weather including high winds, persistent fog and even earthquakes. As we learned during the Talking Circle, Nikolskoye has a well organised emergency preparedness system.

Discussion at the Talking Circle included whether or not the Sand Point community is witnessing an increase in ship traffic and if the community would be prepared and able to accommodate a large scale maritime accident. Participants stated that there has been an increase in tourist ships and the community has very limited capacity to be able to respond to a major incident. To date, SAR has been based on an informal system: if a fisher has an emergency whoever is in the area goes to help. This system clearly would be inadequate in the event of, for example, an accident involving a cruise ship. Discussion at the Talking Circle also included reflection by the community on other issues in Sand Point – in particular, the community’s reliance on Trident Seafoods, a Seattle-based multinational seafood processing company that also sells grocery and household goods at its Sand Point location. Trident does not have a single Sand Point resident working for the company and during fishing season the company imports all of its workers to work in the fish processing plant. The community of Sand Point relies on Trident for many community activities and, potentially, help in the event of an emergency.

While Sand Point residents note the increase in ship traffic they have little communication with the U.S. Coast Guard. All participants agreed that it would be helpful to have regularly scheduled meetings with the Coast Guard so they can be aware of what is going on and learn how to help one another in the case of an incident. Sand Point residents also noted that even though they may have certain pieces of rescue equipment there is no one in the community trained to use some of them.

Likewise, the hospital, which has only five beds, would be unable to accommodate a large number of injured persons. These issues are further compounded by the fact that there is VERY limited internet. The hotel bar, the coffee shop, and the local bar are the only public places that have internet, and Skype is not possible because of the lack of band width.

There was a very fruitful exchange of knowledge with Ivan as the community learned about emergency preparedness in the Commander Islands. We all came away with the sense that the Commander Islands is much better prepared than either Nain or Sand Point for an emergency.  They have full time staff dedicated to emergency response and the community has regular drills. Talking Circle participants also learned from Joey about the challenges and processes for community participation in SAR in Labrador. Relations between the Canadian Coast Guard and Nain residents, we learned, have many issues in common with those in Sand Point, including the challenges brought about by the top down nature of the two nations’ Coast Guard organisational structures).

The meeting was beneficial to the community as it led residents to consider gaps that currently exist in emergency preparedness and what they need to work on to better prepare for an emergency. Talking Circle participants also concluded that they wanted closer relations with the Coast Guard. The meeting had intangible benefits as well, with friendships formed and knowledge exchanged between the international participants. In particular, Joey and one of the most respected and long-time fishers from Sand Point took the opportunity to share fishing stories, knowledge, discussions about equipment, etc.

Overall, the meeting confirmed that climate change is leading to increased ship traffic and, moreover, an increase of extreme weather. Both issues pointed to the fact that better governance mechanisms need to be put into place to prepare for and address an emergency. The community acknowledged that at the end of the day it could not act alone to respond to an emergency and that close collaboration with the Coast Guard is imperative. It was also made evident that up to now relations with the Coast Guard in Nain and Sand Point have not been adequate and that the hierarchical nature of the Coast Guard posed challenges for adequate response.

Local fishers all agreed that a more formalised system for responding to maritime emergencies would be ideal. Likewise, community members acknowledged that they need to be much better internally organised and prepared for a weather emergency, and this included the need to establish direct channels of response with external authorities.
​
The topics covered at the Talking Circle have direct relevance to the themes covered by the other subprojects of the ICE LAW Project, which seek to explore how institutions associated with law, territory, mobility, migration, and resource extraction are impacted by the challenges of the (changing) Arctic environment. On the one hand, the Talking Circle made it clear that as one considers the Arctic environment’s challenges to established notions and institutions of governance, mobility, development, and law, one must be attentive to how these challenges place particular stresses on Arctic communities. On the other hand, the Talking Circle showed that as one seeks to conceptualise new ways in which these principles are being mobilised in the Arctic, it is imperative to ground one’s analysis in what is already happening in the Arctic communities that are on the front lines of resilience and adaptation.
eVENT REPORT (RUSSIAN TRANSLATION)