The third community meeting ‘People of the Changing Permafrost Land’ (June 18-19, 2019), which was organised by Anna Stammler-Gossmann (Arctic Centre) and local partners, took place in a remote northern village of Churapcha, administrative centre of the Churapcha District in the Republic of Sakha Yakutia (North East of Russia) - one of the coldest inhabited places on earth. The degradation of the permafrost scape, changes in the water-ice-land interface and their impact on the livelihoods of Arctic inhabitants were addressed during the seminar. The main goal of the seminar was twofold. On the one hand, it was focused on creating a dialogue between academic representatives (from the social and natural sciences), authorities and local communities. On the other hand, it was important to identify practical solutions to deal with the problem, and to address legally sensitive questions in this field. The scale, the format and the outcomes of this event exceeded all expectations. 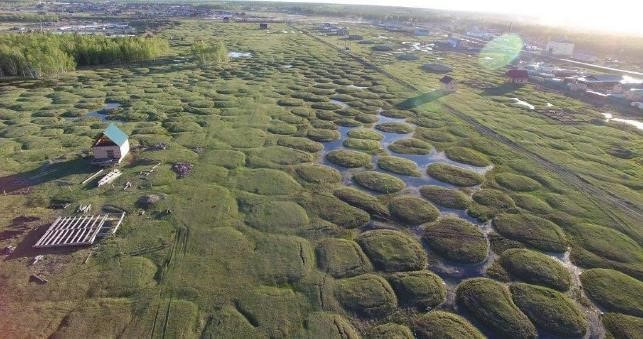 Matter of legal regulations: Is water or ice the cause of the destroyed terrain? Village of Sylan, Churapcha district, aerial shot: Nikolay Basharin
The seminar in Churapcha gained unexpectedly broad public and media attention. Among more than 120 participants were people who arrived at their own expense from the regional capital of Yakutsk, other districts and villages in order to address their concerns about the accelerating degradation of the permafrost-scape. A regional TV and radio broadcast team was recording and directly translating the event’s courses (https://www.youtube.com/watch?v=Z-z4bKJBjqs&feature=youtu.be). Several institutions were involved in the event’s organization. The seminar was hosted by the Churapcha State University of Exercise and Sport and was organized under the aegis of the UNESCO National Committee of the Republic of Sakha Yakutia.
Presentations and open discussions emphasized the complexity and interconnectedness of the water-ice-land-scape. “We in Churapcha thought we don’t have enough water for our agricultural needs and we stored water, built huge water reservoirs and dams. Now we have too much water”, stated one of the participants. Another person from the neighboring district Tatta, reminded the participants that the residents of his village perceive the Churapcha dams to be the cause of big floods in their area, and concluded: “No water or too much water, but now we all together have a general problem with ice."
Speakers and discussants pointed to anthropogenic and natural causes of the thawing processes of the ice ground. Repeatedly raised was the question as to how to deal with the extent of the thawing, and what kind of legal mechanisms should be applied. It brought about conceptual debates on how water-ice relations should be defined. For example, why land, territory and housing destroyed by flooding is eligible for governmental reconstruction measures, but no support is included if the damage was caused by ice.
​
How should permafrost be defined at all? This powerful question pointed to existing challenges in the conceptual understanding of the phenomenon. Construction workers might see it as a base when building a house. Another speaker emphasized the importance of considering permafrost as a resource. Villagers particularly stressed the cultural practices of ice use for food storage. A different interpretation of permafrost came from the academic side.
Scientists from the Permafrost Institute stated that the ‘permafrost’ notion (“everlasting frozen ground”, translated literally from Russian) is just for ‘popular’ use: “Ice cannot be permanent; changes are happening constantly, existing permafrost maps have to be constantly updated”. Ice is the main but not the only component of ‘permafrost’. In an academic geo-cryological paper the use of this definition is not common.
​
During the meeting, experts from different fields highlighted already existing ideas of dealing with the processes of thermoerosion. The participants could observe their disastrous impact during the visit of two settlements and dams – transformed terrain, huge accelerating gullies, subsided surface, endangered oil reservoir and kinder garden ground. 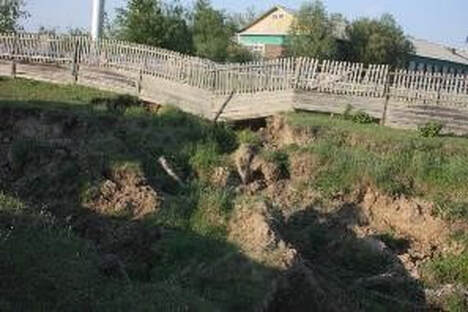 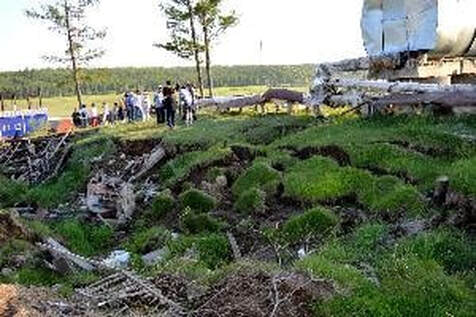 Visit of the seminar participants in the village of Nuorgana, photo top: Anna Stammler-Gossmann; photo bottom: Semen Gotovtsev.
Scientists and practitioners pointed to methods of filling gullies, the question of seasonality of these measures, methods to increase soil fertility and how to plant trees in the frozen environment. The final session of this event - the workshop “Production of topsoil and use of the Californian worms” – was a demonstration using worms and the planting of a birch tree in the garden of the hosting institution. 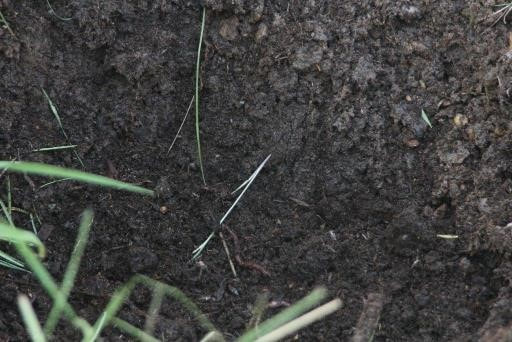 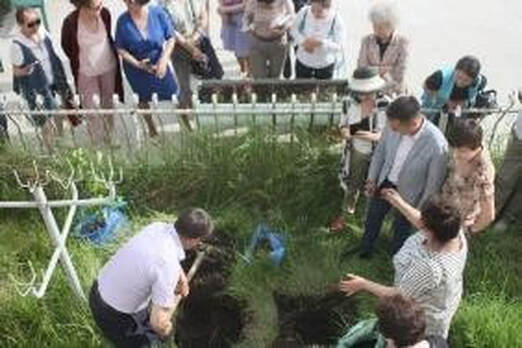 Californian worms in Churapcha soil, photo: Anna Stammler-Gossmann
This event became a platform to not only to express one’s own concerns, reach a bigger audience, and generate new ideas, but to also bring to the public already existing proposals for legal framing and practical solutions.

Participants adopted a draft resolution and after the seminar handed it over to regional government (draft resolution and presentations available (Russian):  http://new.chgifkis.ru/news/obyavleniya/94-news/512-mezhdunarodnyj-seminar-lyudi-na-merzlotnykh-landshaftakh.html).
The main message of the resolution reads as follows:

“There is a need to develop a legal base for the introduction of special regimes of the use of natural resources, their protection and maintenance; also for regulation of nature-human relations of the permafrost land in the context of anthropogenic, climatic and technical impacts on multi-years frozen grounds”.

The ‘People of the Changing Permafrost Land’ seminar happened to address the right topics, at the right time, in the right place. Several websites as well as regional and local newspapers reported on the event. A regional channel of a national TV network screened a full report about the ICE LAW seminar one week later and the issues raised during this event. A network of “permafrost people” was established. Due to broad media coverage, the event gained an attention by international researchers and media, for example by journalists from the New York Times. After the meeting with the members of the organizing committee, the New York Times group visited Churapcha and the issue of the permafrost became a part of the New York Times publication (https://www.nytimes.com/2019/08/04/world/europe/russia-siberia-yakutia-permafrost-global-warming.html).
Organizers of the seminar were: Arctic Centre, University of Lapland, Finland; Ministry of Ecology, Nature Resource Management and Forestry of the Republic of Sakha Yakutia; Melnikov P.I.  Permafrost Institute of the Russian Academy of Science (Siberian Branch); Churapcha State Institute of Exercise and Sport; Yakutsk State Academy of Agriculture, Arctic State Institute of Culture and Art; Municipal Administration of the Churapcha District; Elders Council “Ytyk Sybe” and NGOs of the Republic of Sakha Yakutia.
Acknowledgment:
The organisers gratefully acknowledge the financial support of the Leverhulme Trust and the Churapcha State University of Exercise and Sport for hosting the seminar. Anna Stammler-Gossmann wishes to thank the organizing committee for its enthusiasm and great assistance. Special thanks go to Uliana Vinokurova (Arctic State Institute of Art and Culture), Oksana Romanova (University of Yakutsk), Semen Gotovtsev (Institute of Permafrost, Daria Stepanova (Academy of Agriculture) and Akulina Mestnikova (Churapcha State University).