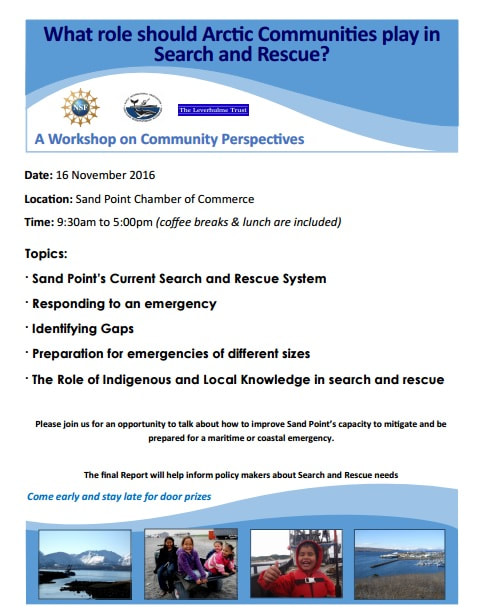 ​As the Arctic’s ice recedes, maritime and coastal traffic is dramatically increasing, whether in the form of destination shipping, innocent passage, or tourism. At the same time, Arctic climate change is affecting Arctic coastal indigenous communities’ abilities to hunt and travel on ice with the same certainty and predictability as traditionally existed. Winter darkness, extreme and unexpected Arctic weather throughout the year, and the presence of seasonal and other forms of ice all will complicate future search and rescue operations. Yet the prospect that an emergency will take place in the Arctic’s seas or along its coasts is almost a certainty. In a region where little, if any, infrastructure exists, a well-coordinated regional approach to Arctic Search and Rescue (which includes Arctic Emergency Preparedness and Response) is an obvious necessity.

Throughout the Alaskan and Canadian Arctic, community level systems with long entrenched ways and cultural rules to communicate with one another for Emergency Preparedness and Response have existed since time immemorial. In recent years, these have included a number of formal institutions, such as the Canadian rangers, hunters and trappers organizations, and whaling associations, as well as the much older systems that are maintained within extended family units. Inuit, for instance, have been using the length of the Northwest Passage as a highway – for transport, for hunting, and essentially for survival – for thousands of years prior to Amundsen’s first successful European voyage. To make this very point, the Inuit Circumpolar Council published a report in 2008 entitled The Sea Ice Is Our Highway, as a reminder to outsiders that, for them, the Northwest Passage was nothing new. Today, the challenge for scholars and policy makers is to create and put into place adequate legal and governance processes for regional Emergency Preparedness and Response policy which can fully include as well as build on these traditional indigenous local level networks.

The ICE LAW Project’s 16 November Talking Circle (workshop) in Sand Point (Aleutian Islands), Alaska focused on how coastal indigenous communities can be key players in Arctic Emergency Preparedness and Response policy and governance, and provided a venue for information sharing as well as exploring policy options. How can local and indigenous coastal communities find their political space in a legal landscape that is filled with government overlap at the domestic levels and governance gaps at the subnational, regional, international, and transnational levels? Participants included community members, private sector and government entities from around Sand Point as well as the Russian Aleutians and Nain, Labrador, Canada. The Talking Circle was held in collaboration with the Aleut International Association.